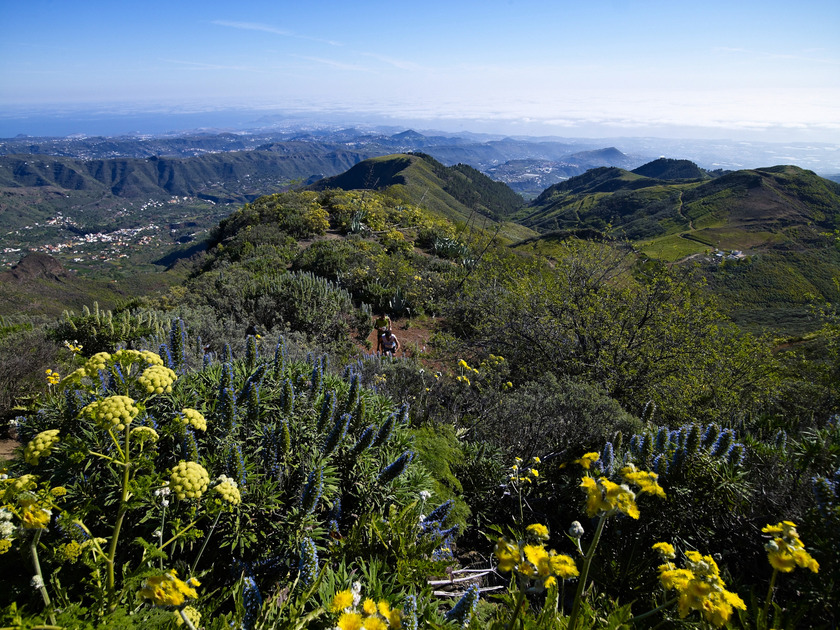 The route runs SW-NE and is classified as a low difficulty itinerary although it can be slippery in the rainy season. The route is of great ethnographic value, given its use for transhumance, and is located in an area of exceptional natural and landscape interest; the Los Marteles Special Nature Reserve.

The route begins next to the GC-130 road, point: P0 Start Los Marteles Caldera, where opposite the route we can find one of the most significant geological elements in Gran Canaria: Los Marteles Caldera, the base of which is used for agriculture.
The first section passes north of the caldera along a forest track on the right, (Image F3) through a reforestation pine forest with epiphytic lichens hanging from the trees, proof of the moisture and low temperatures of this district, which sits on lava formations from the Recent Cycle.
Once we exit the pine forest, we shall come to an area known as Lomo del Salviar, where we shall find some buildings, one of which contains a well - one of the many that exist in the Reserve - as water is one of the most important resources in the area.
In this section, where the ground is based on basanitic-nepheline flows from the Post Roque Cycle, there are abandoned cultivation terraces where, alternating with grassland, we shall find broom, with some Canary Island flatpod (Adenocarpus foliolosus) and typical species from this summit area, such as species of the Micromeria genus, to which the different types of thyme belong. There is also summit marguerite daisy (Argyranthemum Adauctum canariense), a subspecies endemic to Gran Canaria and wild oats (Avena canariensis), an endemic grass species to the islands. From this section on and in the next three sections, we shall find one of the most important species that is unique to this area, the Tenteniguada thistle (Onopordum carduelinum), a species listed in the Red Book of endangered species in the Canary Islands and also listed as endangered by the IUCN (International Union for the Conservation of Nature). The wind has helped the goldfinch (Carduelius carduelius prava), whose song is very special, to extend to this area together with the assistance of the bounty of seeds.

After about 960 metres, we shall reach a bend to the right and the beginning of a footpath at point: P1 Beginning of the footpath that will lead us in a Northeast direction, on the left. This part of the route (Image F1) that leads through an area of yellow broom (Teline microphylla) alternating with blue tajinaste (Echium callithyrsum) leads to an area known as Morro del Aguililla, a name given to this place that refers to a bird of prey (Buteo buteo insularum), a subspecies of the Canary Islands, which is very conspicuous by its size and beauty and can be seen along most of the route. At the base of this hill are some caves of ethnographic value that were used for livestock transhumance and we may also see some demolished “alpendres” on our way down to the forest track.
In this area, we will be able to enjoy a very nice panoramic view of the Tenteniguada basin and of Los Roques and Umbria Ravine.

At the base of Morro de la Aguililla, after walking down for about 340 m, we will take the track again at point: P2 Dirt forest track, along a rather slippery area of lapilli from the Early Pleistocene.
After about 540 m, we shall come to the footpath that leads down to the north on the left hand side of the track, point: P3 Back to the footpath.
The first part of this section passes along basanitic-nephiline flows from the cycle mentioned in the previous section in the area leading to Degollada de Los Cardos, a name that refers to the amount of thistles (Cardos de Tenteniguada) in the district. In this area we will get a spectacular view of the entire municipality of Valsequillo and of much of the Tenteniguada semi-basin, overlooking the inside of Umbría Ravine, whose name refers to the weather in this area.

After about 830 m, we shall reach point: P4 Natural viewpoint. This is an ideal place for observing geological phenomena, such as the “roques” in the Tenteniguada semi-basin, (Image F2), the erosion of the basin and the formations protruding from the ground from the Post Roque Nublo Cycle. The route runs through a spectacular landscape known as the Mocanal Massif, which geomorphologically consists of high and abrupt formations between the Tenteniguada sub-basin and Los Cernícalos, with steep slopes and isolated topographically.
The area known as La Mesa features pasturelands where we can find many species of invertebrates and birds, such as the corn bunting (Miliaria calandra) or the canary (Serinus canaria), endemic to the Macaronesian Region.

After continuing along a flat section for about 530 m, we shall reach point: P5 Descent to Los Alfaques where we shall begin to zigzag our way down part of the steeper sections of the route (Image F4) while enjoying a spectacular view of the part of the municipality of Valsequillo that gives its name to the route.
Here we shall find a beautiful landscape of flora and fauna including the presence of such species as yellow broom, blue tajinaste, morgallana (Ranunculus cortusifolius), a Macaronesian endemism, cerrajera (Sonchus acaulis), present all along the route, and broom (Chamaecytisus proliferus), the latter two species endemic to the Canary Islands.
As we go down this footpath of exceptional ethnographic value, which preserves its ancient layout, we shall also find some wild olive groves (Olea europea cerasiformis), a subspecies that is endemic to the Canary Islands.

At the end of this footpath, we shall come to agricultural areas, where we shall find almond trees (Prunus amygdalus), alternating with natural areas until, after adding just over 2 km to our route due to the winding nature of the footpath, we shall come to the end point: P6 End of the footpath, where there is a small road next to some houses that will eventually connect with a paved road with a well on the left.
We shall follow the road past the Tenteniguada Cemetery, up to the bus stop which is located next to the main Telde-San Mateo road, GC-41, where, after about 660 metres we come to the end of the route at point: P7 End, Tenteniguada.