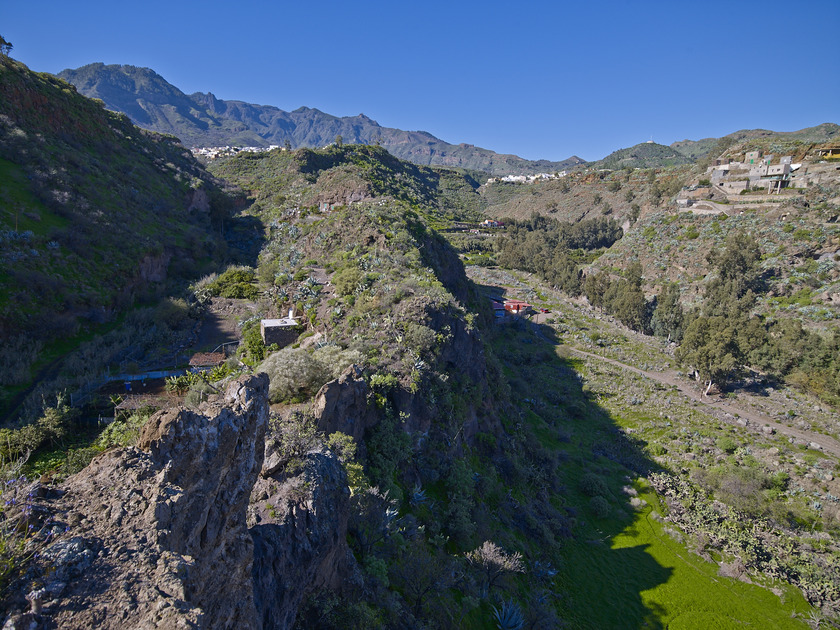 This route goes all along the San Miguel Ravine and connects to two other routes starting at the town of Valsequillo: route nº6 towards Las Vegas and route nº5 towards Tenteniguada.

It is a very easy route with a smooth, constant rise, ideal for a family stroll, but thanks to these two connections it can turn into a demanding journey.

Its main point of interest is its vast ethnographic richness, which gives us an insight about the first few settlers in the region and about the keys to their survival throughout the centuries.

The route begins in the town of Tecén, in the eastern side of the municipality of Valsequillo:P0 Start. Tecéncan be reached by car and is the oldest human settlement of the region, where the antique aboriginal caves were reused as they are nowadays by the new settlers after they conquered the region.

The route continues parallel to the channel of the ravine via a dirt road that, with the exception of the last stretch, is accessible by car.

The indigenous vegetation is abundant with tower of jewels (Echium decaisnei), bridal veil brooms (Retama raetam), local salvia (Salvia canariensis), local lavender (Lavandula canariensis), and verode (Senecio kleinia) among others, which compete with the large number of foreign species. The intense effect of humans on the environment has produced large eucalyptus trees and a large numbers of paddle cactus, agave and reeds, which were originally used to set the limits of plots and enclosures.

After about 460 meters there is an abandoned well on the left and large pond on the right. The large hydrological infrastructure that makes agriculture possible is one of the symbols of identity of this road, which is present all along the way.

It is common to see sheep and goats grazing in the area.

About 160 meters further down the road we arrive to the first path leading to the right side of El Cardón, with its terraced crops, and once we have covered the first kilometre of the route, there is a second track leading in the same direction and we reach the point:P1 El Cardón.

As we travel among the eucalyptus trees the ravine grows wider. On our left we can see the large greenhouse farming of Hoya de Abajo and several traditional homes, while on our right the edge of the ravine becomes steeper.

After leaving the water-treatment plant behind, the ravine also becomes steeper on the left, cut across by the convergence of the Solajero or Las Hoya ravines. The houses of the town of Los Llanetes start to appear on the left, a town famed by abundant terraced crops and caves used both as homes as well as sheds and warehouses. A refreshing fountain by some elephant ear plants is located on the shaded south side of the ravine.

2.2 kilometres down the road we reach:P2 Los Llaneteson the crossing on the right with the road coming out of the town.

On the other side, going to the south, we can take a detour up a climb of almost 700 meters through a dirt road that leads to the abandoned hamlet of Hoya Zurita. There we can behold a typical farming hamlet that used to have everything it needed for its survival in previous centuries: homes, an oven, sheds, terraced farming, etc. Nowadays it is difficult to get close to most of the buildings due to the proliferation of paddle cacti and agaves.

Back in the San Miguel Ravine we arrive to the convergence with the Los Mocanes Ravine. The two ravines mark the limits of the rocky hill known as El Roque.

There is a ranch in its eastern border that is also home to the mill of Los Mocanes or Los Granados, now restored and privately owned.

We can journey to the south side and climb carefully between caves and abandoned terraced farms so we enjoy the splendid views of all the channel of the ravine to the east and to the west.

All the area, the walls of the El Roque hill and those of the north side of the ravine are bored through with aboriginal caves. Some of them are easily accessible and reused as modern housing while others are hanging over the void.

If we continue our way we will first come across some bee hives at the foot of El Roque, which will remind us of the importance of honey in the area during pre-Hispanic times. Then we will come across a cattle farm that also reuses caves as shelter for cattle. Here the shape of the ravine makes it possible to grow fruit trees by the riverbed.

We have covered 3.3 Km when, sheltered between the last and highest number of eucalyptus trees, the dirt road turns into a path. This path will twice have to go around stone walls cutting across the narrowing riverbed of the ravine.

This route descends on the north side of the ravine until it reaches the riverbed. It shares the route with the one we are following for about 500 meters between steep hills. We then arrive to the place where route 6 begins to climb again on the right to Valsequillo and also on the left to Las Vegas, allowing us to combine both routes and even, for the toughest ones, to connect with route 6 of Los Alfaques, which leads to the Los Marteles Crater. If we continue along the channel of the ravine we will find the abandoned mill of Los Vizcaínos on our right.

On the north face of the ravine the houses of the town of Valsequillo are already starting to appear. We then arrive to:P4 Cuartel del Colmenar.This building of great historical importance was the barracks of the cavalry in past centuries and now has a rural lodging beside it. It marks the link with another route (nº 5), Valsequillo-Tenteniguada. Those who wish to continue climbing along the channel of the ravine under its historical bridge can reach the district of Tenteniguada and get closer to the spectacular summits of the town with its many routes.

Those who choose to visit the old town drawn by the historical church of San Miguel and the town's large variety of restaurants can walk the last 230 meters of the route 10 up the hill until they reach:P5 End, Valsequillo.

load more hold SHIFT key to load all load all